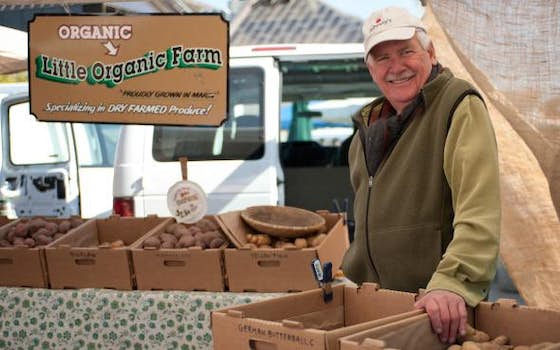 David began to learn about farming when he agreed to help a friend on his ranch near Tomales in West Marin.

He fell in love with farming and the countryside and started looking for ways to support his family on the ranch there and started farming potatoes in 1995. He chose potatoes because the land around Tomales was historically used to farm potatoes and was well suited to the crop. David has since has success growing onions, tomatoes, strawberries, and other crops on the farm.

Dry-farming is a soil tillage technique, an art of working the soil, that creates better flavor and requires no irrigation. Starting as soon as the possible in the spring, when the ground is still wet from winter rains, the ground is disked, disked again, then plowed, then disked again with a roller sealing the ground to hold in the moisture. This method creates a long window from the initial planting and allows the roots to get established.